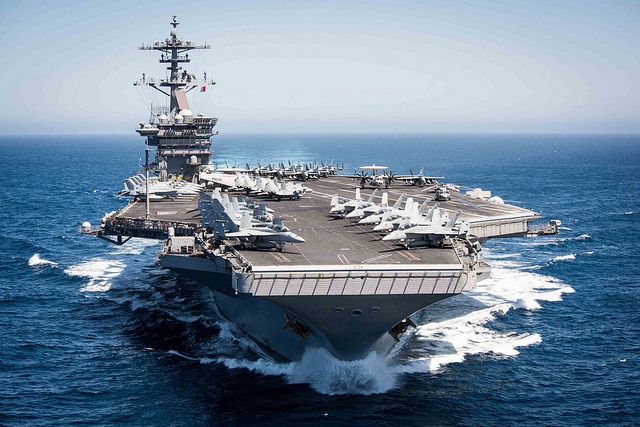 It’s worth asking the question—what exactly does all of our military spending do for us with North Korea?  They devote more of their GNP to weapons than we do, but we’re spending on more on military equipment and technology than the next 8 countries combined.  Is it solving the problem?  Would a few more aircraft carriers put us over the top?

How about the other obvious hot spots:   Syria, Afghanistan, even Iran.  Try to find one where aircraft carriers would fix it.

Since that didn’t seem to work let’s try a more general question:  what are the most obvious and successful military threats to America today?

Unfortunately the answer to that one is cyberwarfare:  both direct government action—such as disrupting elections, and private attacks (with government connections)—such as computer virus attacks.  The intelligence community has been explicit about that, since they’ve had to go public to get the administration’s attention.  Won’t get much out of aircraft carriers there either.

As such it is emblematic of an even bigger problem.  We are refusing to understand the actual problems we face, so we end up wasting our resources instead of moving forward.  That’s no small problem; it’s the way nations die.

Let’s look at the economy.  Here’s some reality:

– American corporations are doing quite well, with record profits worldwide—driven primarily by America technological pre-eminence.  Newest companies, however, are not labor-intensive.

– The labor market is split.   People with the right skills are doing well, people without such skills find fewer jobs at lower wages.  With growing automation, globalization, and de-unionization, workers are weaker than ever in dealing with management.   The minimum wage has gone down in real terms, so that it is no longer a living wage.

– Education is in crisis.  Most of it is state-funded and the states are still trying to recover from the 2008 crash.  Underfunding has resulted in the student debt crisis and in debasing teaching as a profession.

Here’s what are we doing:

– A huge tax cut for corporations, because they supposedly can’t compete worldwide—a conclusion contrary to fact and relying on known deceptive statistics.  And anyone who thinks those new profits will be handed out as gifts to workers should look at history or the rise of the stock market!

– Reduced benefits for anyone who loses a job.  No interest in raising the minimum wage.  Appointment of anti-union judges to the Courts.

– An all-out attack on education.   We can’t waste money on anything but vocational education—the welders (382,730 jobs nationwide) and coal miners (50,000 jobs) from Trump’s State of the Union speech.  This at a time when people need both more specific knowledge and more breadth of knowledge for good jobs with ever-changing technology.   And of course vouchers will privatize education and help break the teachers’ unions—so we can save money there too!

– All-out attack on science, both in influencing government policy and as an independent enterprise.  Scientists removed from consultation roles in the EPA and elsewhere, cuts in government-sponsored research, and new taxes on major research institutions (as compared with tax cuts for businesses).  Climate change cannot be mentioned.

In other words we’re solving a non-existent problem for businesses (with a big present to investors) and at the same time abandoning the population (for both education and support) and denying the importance of the science and technology that have been our success.

The rest of the world has learned from us the value of an educated population and of moving forward wherever opportunity lies—but we’ve lost interest in that approach.  Instead we have a new religion of the unencumbered private sector as the solution to all problems!  As noted before, even Adam Smith himself wouldn’t sign up for that one.

This administration likes to talk about putting government on a business footing.  That’s just talk.  Businesses are hungry for facts and solve real problems.  Denying reality is the quickest way to go broke.

That can happen to countries too.