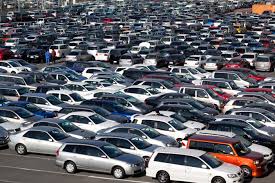 As usual we need to put two and two together for these announcements.

In other words they’d rather come up with the next SUV—a product niche initially unique to the US—than fight it out in the more competitive international market where such standards hold sway.  (Even the Korean deal actually had to include an exemption from such rules, or we couldn’t sell anything!)

So we have theater instead of economic policy.  Too bad we can’t just export media events.