You can’t turn around today without someone talking about how great the economy is.  Low unemployment and low inflation.  What could be better?

In fact you don’t have to look far to know something’s wrong.  For once this is less a matter of lies than of myopia.   We’re living in an artificially-created bubble, and while we don’t know exactly when it will end, this is never-never land.   We’ll go through it step-by-step:

We incurred $985 B of deficit this fiscal year as short-term stimulus to an economy already at full employment.  That’s a monumental $300 B over last year—in good times. As in every other such case, the tax cuts are NOT paying for themselves.  During the year we had a small reduction in unemployment from 4. 1% to 3.7%, but at no faster rate than last year and with no increase in inflation-adjusted wages (one-time bonuses from the tax cuts were negligible in the statistics).  You might ask why we would do such a thing—$1 T is a lot of money—but one thing the deficit certainly delivers is that much more economic activity in an election year.  The same people who starved recovery from the 2008 crisis to help with the 2016 election gave themselves a big boost for this one.

You might also ask how long we can continue doing it, and the following budget chart makes that unmistakably clear: 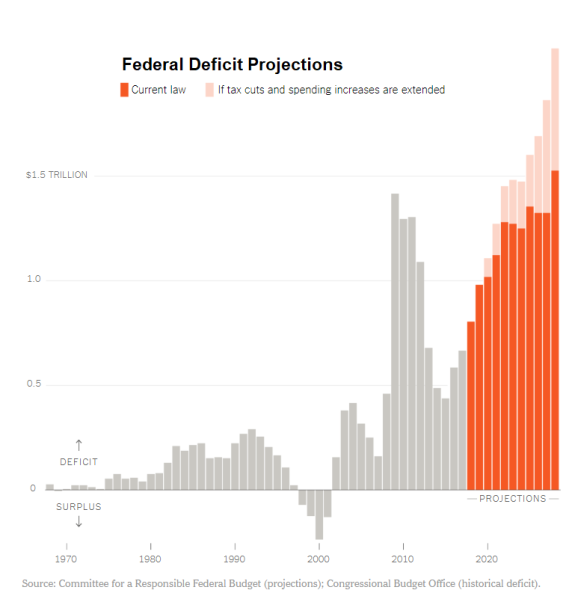 We’re running up unimaginable deficits in good times, with consequences we’ll talk about in a minute.  And the chart actually understates the situation.  The underlying figures come from a CBO report written in April, when their estimate of the 2018 deficit was $805 B. With a final 2018 deficit of $985 B, the situation now looks considerably worse. The CBO report said that we would reach deficit = $1T by 2020 and then reach the sinister milestone of debt = total GDP by 2028.  With the current deficit, we have reached the $1 T value in 1/3 the time, so that second milestone looms sooner now too.

None of this is sustainable.

Much discussion of deficits seems theoretical, but the consequences of our current deficits are real.  Republicans are already talking about cuts to Medicare and Social Security as counterpart to last year’s tax cuts.  Just imagine now we’ve reached a downturn in the economy—not even necessarily as bad as 2008.  We’ll have the massive deficit-induced debts shown in the prior chart, and now—on top of that—tax receipts that have just collapsed with the economy.  In that case we’re not talking about changes around the edges of Medicare and Social Security, we’re talking about no money for it and “taking the hard choices we just have to do.”   That means dramatic change in what it means to be living in this country.

Further (as noted in the CBO report) the deficit is a time bomb.  As interest rates rise in good times, the yearly cost of financing the deficit rises accordingly.  We’re already talking about deficit finance costs higher than the defense budget.  And it will just continue up, eating into available money for healthcare, education, opioid crisis even before a downturn.  There are good reasons not to incur deficits in good times!

With all Trump’s talk about the private sector and relief from regulation you might think that the country has been liberated from misguided government meddling with private enterprise.  But you’d be wrong.  The current executive-imposed tariffs and trade wars constitute the most extreme government intervention in the economy within memory.

The steel tariffs hit anyone building anything out of steel—basically forcing export-directed activities off shore.   The new USMCA regulations have already caused layoffs at Ford (and the touted benefits to labor are so far from clear that the unions can only wait and see).  The trade war with China disrupts values chains of any corporations not sufficiently well-connected to get exemptions.  The government is choosing winners and losers in the economy based on impulse (coal and steel sound good) or lobbying (the Apple watch).  And established companies have been winning out over newer, innovative ones (net neutrality) any time the issue comes up.

All of that, together with xenophobia and lack of support for education, augurs poorly for the state of our economy going forward.  And we’re even waging economic war with the largest, most rapidly growing economy in the world—in the name of protectionism!

Since the subject is the economy, we’re talking here about the related topics of personal and national economic success.  It is of course a truism that the world economy is changing.  Good jobs, and the jobs that maintain our national standard of living, are changing.  Very many of them require more and different training.  (One list of the top ten growing job categories is given here.)  Economists going back to Adam Smith have recognized the responsibility of government to educate the population.

However with the tax cuts we took a very different tack, essentially trusting private sector prosperity to raise all boats.  There is no evidence that works.  The tax cuts went primarily to stock buybacks (see the mind-boggling level of buybacks below), leaving issues such as education (including the student loans crisis), infrastructure, and healthcare up for grabs.

For now, protectionism is the solution to job retraining, consequences of automation are unaddressed, and instead of preparing people for good jobs we’re busy fantasizing about the past.

Climate change belongs on this list, because inaction will just make the economic effects worse.  Climate change may have morphed into a partisan issue, but nature isn’t fooled.

Consequences will be in many forms—severe weather, changes of temperature and rainfall, sea-level rise.   Turning around today’s carbon-based economies takes time, so if we don’t start acting now, we’re talking many trillions of dollars of expenses for repair and to forestall truly disastrous consequences.  The recent IPCC report found more serious effects than previously recognized by 2040.   As the following chart shows, the US currently generates twice the per-capita CO2 of any other major player, so we have a long way to go.

For now we are doing worse than nothing.  Climate change is an issue where international unity of purpose is extremely important, because cheaters—with cheap coal—can prosper.   We have not only endorsed coal for ourselves but actively encouraged cheating.  Further our departure from the Paris Agreement process—and in particular our disavowal of the whole idea of rich countries helping poorer ones act in our common interest—leads directly to dangers such as Brazil abandoning protection for the Amazon.

Ignoring climate change means more damaging effects of warming, and more drastic (and expensive) action in the end.   Furthermore, as a purely economic issue, by denying the issue we are sidelining our own companies’ participation in this necessary multi-trillion-dollar enterprise.  The day will soon come (we’re now talking just 20 years to get off coal, oil, and gas) when this moves to page 1 of the news, and stays there.

Our never-never land economy is good only so long as we keep our eyes closed.  But if we don’t open them soon, we won’t recognize what we’ll find later.