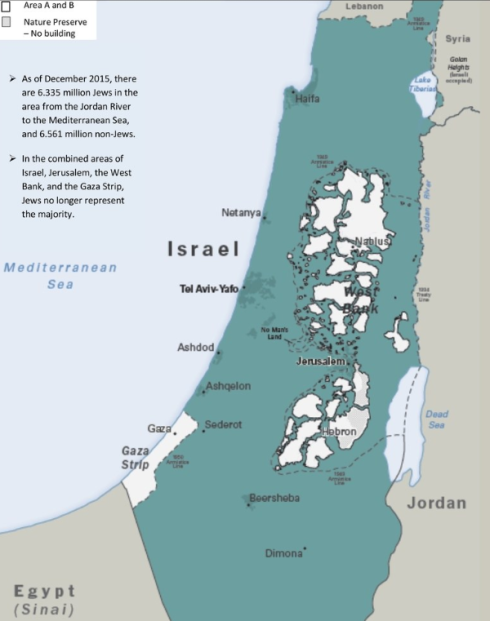 It may be impossible to say anything useful about Israeli-Palestinian relations, but there’s so much pseudo-reasonable propaganda around (e.g. here and here) that it’s tempting to try.  It’s a hard problem, but sometimes hard problems do get solved.

First of all, we should address what seems to be in the offing from the confident Mr. Kushner.  By all reports we will hear that Palestinians should just suck up to Israelis, because they will be much better off.   That is at best an assumed-benevolent provision in an Israeli declaration of victory; at worst it is a justification for added repression when it fails.  The subject seems eerily reminiscent of the way the British talked about Ireland a hundred years ago.

There is in fact no alternative to a two-state solution with recognition by both sides of the other state’s right to exist.  Such a solution is a necessary condition for all parties involved.   It’s hard to imagine anything else stopping settlements or dealing effectively with right of return.  The fact that no one wants to talk about it now is a problem, not a fact of life.  There are of course many problems to be solved, but there is at least the potential of a way forward.

Out of sheer frustration it’s worth listing some of the mythology that’s getting in the way:

On the Palestinian side:

– Our land was stolen, so there is nothing more to say.

Both sides are going to have to admit the other has a claim, or there is no alternative to fighting to the death.

– They keep killing our people.  Any deal with them is treason.

Both sides believe that one.

– We’re the victims of ongoing Israeli oppression.  We have no obligation to live up to any deal.

The reason to have a deal is that it is better than not.  Trust is necessary to make any progress beyond the status quo.

– This is a religious war and/or a fight against Western imperialism.

It’s not.   It’s a fight over claims to the same land.

On the Israeli side:

You can believe whatever you want for yourself, but you can’t expect anyone else to go along.

– This is our land, granted to us after the second world war as a continuation of a process that goes all the way back to the Balfour Declaration.  All further territory was rightfully won in battle.

For the other side that’s just a restatement of the Western imperialism story.

– They keep killing our people.  This will go on “until they love their children more than they hate us”.

Are you any less devoted to the cause?

It’s not.   It’s a fight over claims to the same land.

It’s already a cancer on the state, and that will only get worse.

The first step in any negotiation has got to be an acknowledgement by both sides of the other’s right to exist.  Nothing else can go anywhere, so it might as well be confronted head-on.   Maybe the necessary transition in Palestinian leadership can help the process.   Maybe there will be a transition in Israel also.  Something is certainly out of whack when the Israeli leadership is making deals with terrorists and is most comfortable with Eastern European anti-Semites!

If you can get that far, then Kushner’s financial backing project takes on real meaning.  It is imperative that a Palestinian state be economically viable as a precondition for political stability.  Even given that, though, there are all kinds of detailed issues to be hashed out:  most fundamentally there is the problem of the map, plus other items such as water rights, and rights for Israelis and Palestinians in each other’s states.  The matter of Israeli settlements is of course difficult, but despite the famous Obama-era map shown at the start, I would like to believe this is not impossible.  Israel will have hard decisions, but the never-ending occupation can only be cured by a viable Palestinian state.

That brings up the matter of Israeli security.  Despite the scary ring of it, that seems less serious in practice than in theory.   Any Palestinian state would be risking its continued existence by preparing an attack.

For the economy, a possible solution could be something like a customs union, where the Palestinian state would both benefit from and be useful to the Israeli economy.  That’s not an impossibility; just lots of hard steps to get there.

And it has to be emphasized that the benefits to all parties would be incalculable.  If there is anything that can bring stability and economic growth to the Middle East, this is it.  There’s only so much we can do to make it happen, but blind support of Netanyahu, abandonment of the two-state solution, and uncritical reliance on MBS do not contribute to any recipe for peace.