Our piece on Inslee’s climate proposals included a video clip from MIT professor Henry Jacoby on the international side of climate change.  That clip deserves more than a passing reference, because its implications go far.  In its own way this is truth-telling for a story that has been largely ignored

Just to repeat the obvious, there is only one atmosphere.  All the carbon dioxide from everyone gets mixed up.  Since we represent about 15% of the world CO2 production, we only control 15% of what happens to us.  We can feel good or bad about how well we’re doing with our 15%, but the other 85% comes from everyone else.

For that other 85% it should be emphasized that there is no world government to deal with it.  The only way to make progress is for all of the world’s nations to unite on a process that makes sense, on a national basis, for each country involved.  That was the achievement of the Paris Agreement—there is no other mechanism for going forward.  (We’ve talked elsewhere about justice and economic impact.)  US withdrawal means we will be stuck with consequences of that other 85%, regardless of what we as individuals or cities or states can do.  Let’s see what that means. 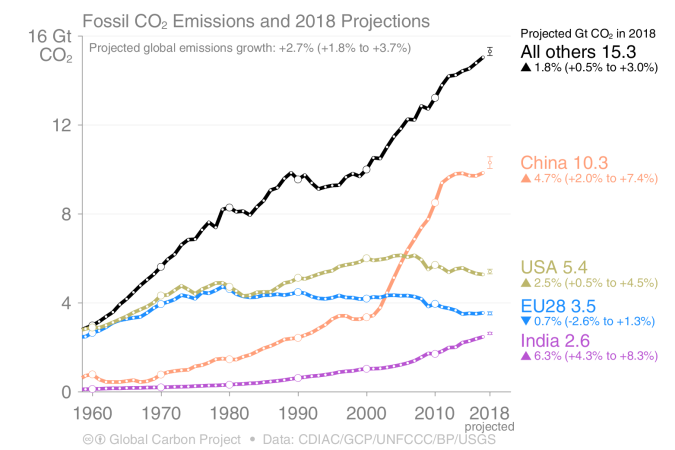 The Paris Agreement is not a single step, but a process.  The path to success involves regular revisions of national targets according to a succession of 5-yearly updates.  The next such update is in 2020.

Progress won’t happen by itself.  It only works if everyone keeps on-track—and US withdrawal undermines it all.   Now that we’re out, the Germans and the Japanese are replacing nuclear plants with coal, and the Chinese (while retreating from fossil fuels in their own country) are pushing coal and oil elsewhere with their Belt and Road initiative.  With the US committed to (and encouraging) cheating, the 2020 updates are in jeopardy, and there is a real question if the poor countries of the world will be in any position to deal with the 75% of CO2 emissions reductions that Professor Jacoby notes must come from the developing world.  Rich countries like us are only going escape the consequences of climate change if they can get back in the game to make progress with poorer ones.

As long as Trump is the US President, we are giving up on what happens with most of the sources of the CO2 in our atmosphere.  That means, regardless of what we do for ourselves, we are committed to a national disaster.

So it’s important to keep things in perspective.  It’s good for the US to commit the effort necessary to meet our climate objectives.   But we should not delude ourselves about what controls our destiny.  The highest priority for climate action is to defeat Trump.  Between now and the election there is no other climate priority that comes close.