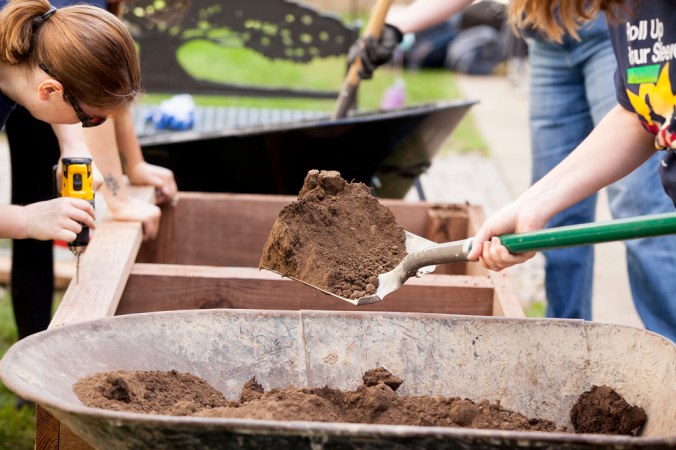 “COD Volunteers Give Back to the Community During COD Cares: Roll Up Your Sleeves Service Day 103” by COD Newsroom is licensed under CC BY 2.0

Ideology can be inspiring, but it’s never the same as a plan to get a job done.  For now it’s getting in the way on many issues.  Here are a few examples:

ACA is an imperfect compromise with known issues—in part because it was a non-final version enacted in the wake of Scott Brown’s Koch-funded victory for Ted Kennedy’s Senate seat.  All attempts since then to improve ACA have been blocked by anti-healthcare Republicans.

That being said ACA has enabled tens of millions of people to be covered for the first time, and it is supported by a non-regressive tax—the ACA surcharge.  It also attempts to get around some of the worst problems private insurance by covering pre-existing conditions and regulating how much of premiums must be paid out in benefits.  In fact insurance profit margins in healthcare are well-below margins in every other insurance category.

The most critical issues today are to improve coverage, pricing, and the range of offerings for ACA plans.  Some of this is just a matter of rolling back Trump efforts to destroy ACA.  The rest is more complicated, but nonetheless well-studied.  This needs to happen independent of long-term plans.

“Medicare of All” is an ideological choice—to get healthcare away from the insurance companies.  It’s a good slogan but something of a misnomer, because the changes from Medicare are decidedly non-trivial.  The Sanders bill optimistically assumes all private insurance will be gone in four years, but without a real plan to make it happen.  While virtually all developed countries have some form of universal healthcare, the systems are dramatically different from country to country, and many keep some form of private insurance.  Even current Medicare has many roles for private insurance.

Focusing on Medicare for All does nothing for current problems, and puts us in an ideological battle for the future.  As Krugman recently pointed out “Not many people love their insurance companies, but that doesn’t mean that they’re eager to trade the coverage they know for a new system they don’t.”  Additionally—for current Medicare recipients—Medicare for All is easily posed as a threat to Medicare itself.  That worked (using ACA) in the Scott Brown election and could well work again.

The long-term objective is affordable, universal coverage.  And the first steps start now.

If anything should ever be non-ideological it’s climate change.  Facts are facts, and the solutions are primarily matters for science and engineering.  The main political issues are how much money to spend and who is going to pay for it.

Both sides, however, have turned this into a culture war.  That the Kochs have dishonestly challenged the basic science is by now almost beside the point.  “Bad science” is just an epithet thrown out in the culture war.

We need to stop the culture war and make sure we take care of the people who will be hurt as the economy goes off fossil fuels.  Green New Deal makes some things better and some things worse.  There’s so much political deal-making thrown into it, that it can’t possibly be viewed as anything other than a left-wing grab bag.  Maybe that helps in defeating Trump—which is of course necessary for any progress—but there are too many distractions from the climate change goal.

We need to make sure that everyone realizes that the new post-climate-change world is a good world for all—even people who want to drive AV’s and Chevy Suburbans.  And we need to commit to protect everyone—coal miners, car mechanics, people hit by carbon pricing—who might otherwise be hurt in the process.  That’s the objective.  We can refuse to play the Koch’s culture war game.

We have to get away from the notion that we need to create a kind of “socialist new man” of conservation.  We’re not repealing the industrial revolution.  We just changing the technological underpinning of how things work.  That’s not to say there aren’t other environmental issues, but they’re not the same.  We shouldn’t expect fixing climate change will put the EPA out of business.

This whole area is filled with so many wrong and misleading ideologies that we can start with a catalog of wrong ideas.

Manufacturing is the basis of economic strength.

The Chinese have gutted manufacturing in the US.

Balance of payments is a good measure of economic strength.

A strong private sector will provide everything necessary for economic success.

In the future there just won’t be jobs for everyone.

From the list it’s clear this isn’t a matter of left versus right (even if you discount the lunatic fringe running things today).  The world is moving into new territory (more and more companies with 0 cost of production, tighter and more automated international links).  So the challenge is to see things as they actually are.

Ideologies can get in the way of understanding.  No candidates seem willing to talk about the transition from a manufacturing to a service economy.  Unions and antitrust enforcement are still good ideas, but they buy less than they used to.   As the last of the points indicates, futurists tend to provide more ideology than reality, so nothing beats experience and pragmatism.

For ourselves we see government challenges as:

Supporting education and research to keep ahead of technology change.

Managing the continuing transition from a manufacturing to a service economy.

Maintaining quality of life for all who live here.

Consciously working at creating and managing the international institutions that make the world work.  We used to recognize this responsibility (and avenue to exercise power), and no one else is stepping into the gap.

Overall we need to recognize the problems we do have—not the ones of the 1930’s—and look what will actually be effective to fix them.

There are many other areas where the same kind of story plays out—where an ideological war masks a more tractable, practical problem.  I’d even put immigration in that category.

It’s hard, given the daily atrocities of the Trump era, to focus on anything less than epic changes.  But if we’re going to put the pieces back together afterwards, it’s pragmatism that will get the job done.