Foreign policy these days has been drifting along.  Negotiations with China have gone up and down for many months.  Nothing is happening with North Korea.  (Kim has given some kind of threat for the end of the year, and we’re wondering if we care.)   It’s easy to assume all is sort of okay while we’re working on it.

That’s false.  With trade wars as with other wars, if you’re not winning you’re losing.  That’s true in spades today.

As we (and Nancy Pelosi) have pointed out for some time, we began the trade war by giving up a good chunk of our leverage.  We and the EU each represent 18% of Chinese exports, so we gave up half the leverage for a Trump-style exclusive deal.

That was bad enough.  What’s worse is that the leverage goes down every day.  That involves both Chinese imports from the US and Chinese exports overall.

On the import side, China has been forced by the trade war to develop new sources for strategic products, since the US can no longer be considered a reliable supplier.  The last Huawei phone, for example, has replaced all US components.  Additionally, China has developed alternate sources for products that it restricted in retaliation for the US tariffs.   It’s now sourcing soybeans from Brazil and Argentina, relationships that are expected to survive any US trade agreement with China.  In other words our leverage as a strategic supplier to China is decreasing dramatically.  What’s more, this gives a pessimistic picture of what is to be expected of US exports to China even after a deal!

For Chinese exports, there’s no question that the Chinese economy took a hit from the  US tariffs.  However they have looked to beef-up exports elsewhere and also to stimulate their own domestic market.  After the initial hit their balance of payments has shown resilience: 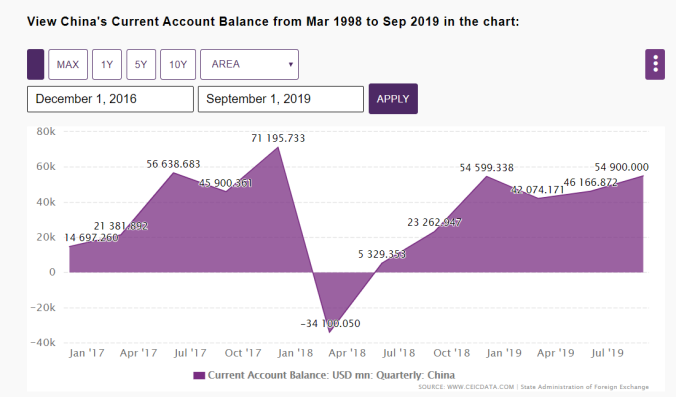 Another round of US tariffs would hurt again (at the expense to us of a very visible and regressive tariff tax), but there is no sign that the Chinese are going away.  As they continue to work on replacing the US market, time is on their side.

With North Korea, even with the continued sanctions, production of nuclear weapons and missiles is continuing unabated.  The threat posed to the US by those weapons should not be taken lightly.  The destructive power of nuclear weapons is such that only a few are necessary to assure victory.  Japan was defeated by two, small-grade weapons and a faked threat of more.  In theory a successful cyber attack combined with a nuclear threat could defeat anyone.  North Korea is a world leader in cyber attacks.

What’s more, the strategic value of those weapons is going up all the time.  As we threaten to withdraw support from Japan and South Korea, the regional status of North Korea grows.  Do we really think Kim will give it all up?  (And can we deny that other countries will want to follow his example?)   It’s not what Kim might or might not announce in December that’s the issue, it’s what has been going on all along—while he’s been Trump’s buddy.

So in neither case are we working quietly toward a solution.  We’re just plain losing.

7 thoughts on “Waiting is Losing in China and North Korea”