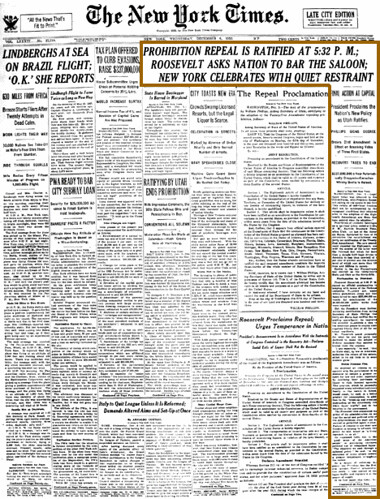 As a nation we seem to be baffled by the problems of drug-based criminality south of the border.  Why can’t those people live like us?  What makes us so superior?

For those questions it’s worth emphasizing that we used to have problems like that too.  Our problems were self-inflicted, but the phenomenon was similar.  Let’s talk about Prohibition.

Prohibition was a reactionary revolt much like what we’ve got with the Christian right today.   The heartland was able to stick it to the godless, immigrant-infested cities.  No more alcohol to corrupt our body fluids.

That repressive crusade was just too overarching to succeed.  It resulted in an immense network of criminality to meet demand.  Criminality pervaded every corner of the country, and the kingpins captured the news daily.  It could and did happen here.

Let’s compare with the situation in Latin American.  North of the border there is vast money to be made with illegal drugs, and the resources available to stop it are ludicrous by comparison.  Big surprise they’ve got a problem.  We have drug problems too, but we also have resources of the US.

What kind of help do they get?  They can’t even get us to slow down the sale of military-grade weapons underpinning the drug wars.