It seems perfectly reasonable.  Each ton of CO2 added to the atmosphere causes damage.  We can estimate that damage by looking at what’s happening.

The Obama administration went through that exercise in some detail to justify environmental protection measures—and came up with $42 per ton.  The Trump administration people reduced that number to less than $7 and increased the future discounting factor from 3% to 7%.  That’s certainly a problem.

However the $42 figure is also wrong, and the whole notion of a dollar cost of CO2 undermines much of the discussion of the costs of climate change.

One way to see that is to look at the language we use to talk about hurricanes.  For starters I’m going to reference the usual storm class definitions:

As the wind speed increases, the damage rises by orders of magnitude.   At each stage the damage rises to such a degree that damage at the previous level becomes negligible.  There is no single number that tells you how much extra damage you’re going to get from a 5 mph increase in wind speed—it gets dramatically worse with each stage.  This is basically an exponential model; it is certainly not multiplication of windspeed by a number appropriate for category 1.

You can see how this argument plays with climate.  Starting with hurricanes, we have a basically linear relation of CO2 concentration and water surface temperature: 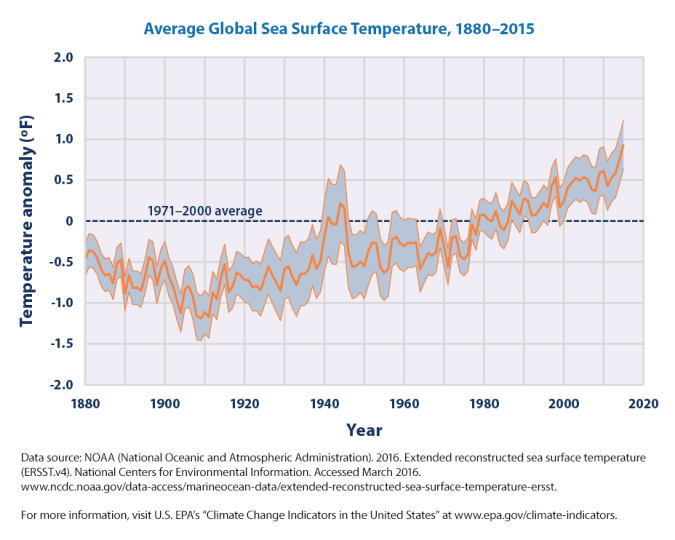 The same kind of relationship holds for almost any kind of climate damage you can think of.  Sea level rise first affects marginal districts but then more and more of mainstream society.  Droughts first affect marginal areas and gradually more and more of the breadbasket.  Health threats first affect the most vulnerable but eventually everyone.   Accelerating costs are the rule, not the exception.

How does this affect how we think about costs of climate change?  In fact we’re missing most of the damage.  The cost of a ton of carbon today has two components:  the costs that we measure today and the extra damage incurred by raising the CO2 level for all subsequent tons of CO2.  That second part is what you won’t get with any fixed value for the cost of CO2.  It may be harder to calculate, but it’s ultimately the main thing—because it’s adding CO2 that gets us to catastrophe.  We’re missing the step-ups in the hurricane example.

There’s a weird dichotomy between the science and the cost models.  On one hand we have scientific studies about truly catastrophic consequences of going beyond a global temperature increase of 1.5 degree C—even to 2.0 degrees C—and on the other hand we have the fixed value of $42 per ton.  In the second case we’re not charged for contributing to glacial melting that can’t be stopped before inundating both Bangladesh and Manhattan.  It’s beyond ludicrous that we’re applying discounting factors to future costs but not charging for the long-term consequences of that ton of CO2 that remains in the atmosphere!

For now the only viable number for the cost of a ton of CO2 in the atmosphere is actually how much it will cost to take it back out.  That number is currently about $1000 a ton. There are many people trying to do better; the current (undoubtedly overoptimistic) estimate is about $150 per ton.  That’s the lower bound.  And even that low-ball estimate says we’re currently subsidizing the fossil fuel companies by about a trillion dollars a year.

Believe the scientists.  A catastrophe is a catastrophe.  You can’t make it go away with cost models that sweep it all under the rug.